I love coming home to a new issue of Runner’s World that is just waiting for me to open and read the fresh pages. I wanted to start reading it right away but making dinner came first. So, I cracked open my cookbook that my sister and bro-in-law bought me for Christmas, The Best of Chef at Home by Chef Michael Smith. 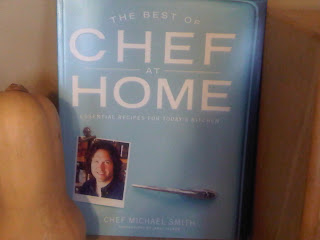 I opened it up and found a recipe called, Southwestern Black Bean & Corn Chili. The only problem was I didn’t have all of the ingredients I needed. And I wanted ground beef in my chili for iron. So, I freestyled the recipe into a bowl of delicious heaven. 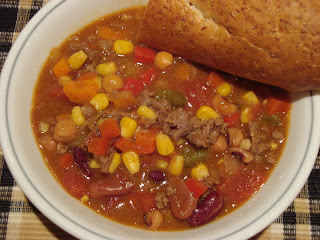 2 tablespoons of any vegetable oil (I used Extra Virgin Olive Oil or EVOO as Rachel Ray likes to call it) 2 large onions, chopped
1 large carrot, chopped
1 red bell pepper, chopped
1 green bell pepper, chopped
4 cloves of garlic, minced
1 chipotle pepper, packed in adobo sauce (I did not have any)
1 tablespoon of chili powder
1 table spoon of ground cumin (I used cumin seeds)
1 tablespoon of dried oregano
One 28 oz can of whole tomatoes (I used a can of diced tomatoes)
Two 16 oz cans of black beans, drained and rinsed (I used mixed beans)
2 cups of frozen corn (I one 16oz can of corn)
A sprinkle or two of sea salt
4 green onions, thinly sliced (I didn’t have any)
A bunch of chopped cilantro (I didn’t have any)
I added extra lean ground beef

Splash the oil into a saucepan and brown the extra lean ground beef.
In a separate saucepan, splash oil into a large saucepan over medium-high heat. Add the onions, carrot, bell peppers and garlic. Saute until the onions are golden and the vegetables have softened, about 10 minutes.
Add the chipotle pepper, chili powder, cumin, and oregano. Continue cooking, stirring constantly for a few minutes longer.
Add the ground beef, tomatoes, black beans, corn and salt and bring everything to a boil. Reduce the heat so it’s just high enough to maintain a simmer. Continue cooking without a lid, stirring frequently, until the flavours are blended and the chili thickens, about 30 minutes.
Taste and add some more salt if you like. Just before serving, stir in the green onions and cilantro.
I also like to serve chili with a whole wheat baguette.

While I waited for my chili to simmer, I whipped out my new Runner’s World and stretched while reading my new mag. It’s the best way to multi-task! 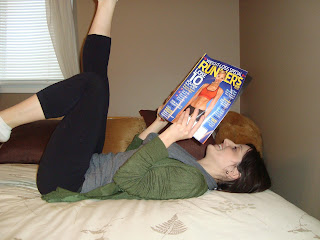 Today’s Workout: Jillian Michaels 30 Day Shred. Wow. She is fierce. And I literally kicked my butt with butt kick runs!
Love my blog?! You can vote for me at BEST HEALTH MAGAZINE’S BLOG AWARDS HERE!

OK friends, I took my new shoes out for a spin. The one out of the two options that I had and I’m pretty sure we were made for eachother. So option number two for shoes. Are you ready for them?!

And up close and personal… 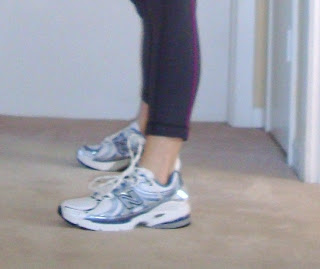 You’re probably thinking, “Siobhan, those are your old shoes. You just washed them!” Friends, I bought the exact same shoes. Same brand, same size, same style number, and the exact same colour. I was so against this idea but I put them on went for a jog in the store and said, “I’m still in love!” So I put them in their box and said, “Yep, they’re the ones!”

It’s funny because I came home and read my book ZEN AND THE ART OF RUNNING By Larry Shapiro: 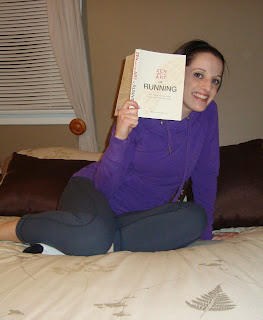 and he said that when you have a Zen attitude you find a product that works for you and you stick with it. You need to experiment with different products and find the ones that work best for you. Stability 760’s (aka my sole mates) I’m glad we are together again! But I have learned from this experience and I will be special ordering my next pair of shoes very soon!

And another plus– my legs felt so good at boot camp! I didn’t want to chance them being 100% so I came home and heated my legs while watching The Bachelor. Nobody likes leg pain coming back for revenge!

And how excited am I for another week of The Bachelor?! How could I even forget that there is a “The Women Tell All” episode the week before the proposal. ﻿﻿Ahhh-may-ziiing!

You can only vote 13 more times for BEST HEALTH MAGAZINE’S BLOG AWARDS!
And you can do it HERE once a day! 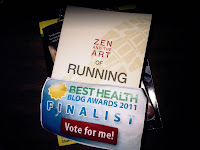 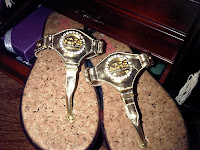 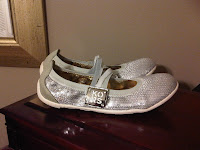 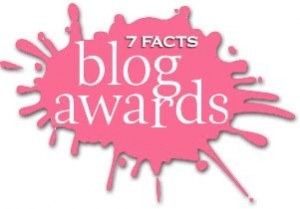 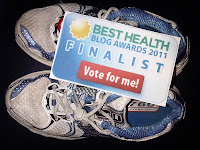 I love the days where you just go for a run.You don’t have to worry about tackling hills, lifting weights, or getting your butt kicked at bootcamp. Just running to run.

Some of my friends have been telling me that they want to love running but it’s hard. I feel this way with sushi. I swear I’ve tried it three times at restaurants and everytime I just can’t finish it. I don’t understand it. I eat mussels, crab, lobster, salmon, tuna, cod, calamari, etc but when it comes to sushi– that seaweed taste just disgusts me. I know, I know! You just can’t love everything. I found that when I really started to love running was when I didn’t have to worry about my breath sounding like the last kid to get picked on the baseball team. I finally found my comfortable pace that didn’t leave me panting and all red in the face. Well, honestly I still get pretty red- it’s just my fair complexion!

The best advice I can give is to run to have fun! You can’t always worry about PR’s, taking walking breaks, or how fast your pace is. Sometimes you just have to remind yourself that singing outloud on your treadmill (guilty!) and  laughing outloud at yourself during your run (guilty again!) is how you have fun when you run.  And of course reward yourself with a post-run PB and Banana Soy Smoothie! 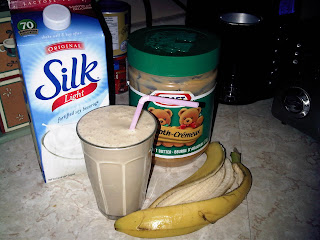 ﻿
During my last run I put on some oldies and rocked out. Kind of embarrassing but so fun! As soon as I hit 7.5 K my knee started to give me problems and I knew I should bring down my run pace and just stop. So, I listened to my body, finished my run, and found my friends the balance board and hand weights and had some fun with them for a while.
The Rescue Me Playlist
Rescue Me- Fontella Bass
That Thing You Do-  The Wonders
Love Shack- B-52’s
Build Me Up Buttercup- The Foundations
Voulez-Vous- ABBA
Crazy Little Thing Called Love- Queen
In His Kiss (The Shoop, Shoop Song)- Cher
Jump (For My Love)- The Pointer Sisters
This Will Be (An Everlasting Love)- Natalie Cole
Ain’t No Mountain High Enough- Diana Ross
Cool down/Stretching
Wishin’ and Hopin’- Ani DiFranco
Stats of the Run
Distance: 8.18 km
Pace: 4:16 min/km
﻿
Before you see if Black Swan will win at The Oscars tonight, head over to BEST HEALTH MAGAZINE’S BLOG AWARDS and VOTE FOR ME! Remember friends, you can vote once a day HERE! 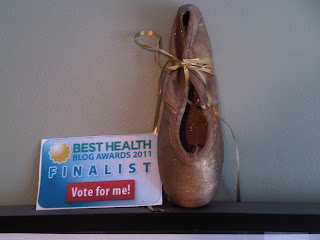