I’ve been following Run Disney’s clues for their latest race for a month now. After being completely confused and waiting for the day that they announced the big reveal- it happened! Yesterday, the new race was added to the schedule and registration officially began. What is the new race?

A Tinker Bell Half Marathon! How amazing is that?! Of course there is the controversy about it being another gender specific race. But, when it comes down to it- who doesn’t love a pint-sized pixie who carries around pixie dust and flies from a castle every night? I just wish this race was in Disney World instead of Disneyland. Mainly because it’s less expensive to travel from Toronto to Orlando than flying TO to Cali.  If it was at WDW, I would have already signed up just so I could wear wings and look like this when I’m running: 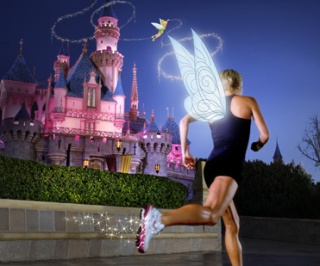 And of course to add another Disney inaugural race to my resume. Anyone wanna run it with me?! Check out all the details HERE!