That’s a big statement. And- it’s true! I really do love my hills. They feel like such an accomplishment when you run them (even if it is on the t-mill!) I’m still alternating between running outdoors and indoors so that I don’t wreck my knees. I even pushed myself up to the 7% incline on the t-mill. I’m not gonna lie- as good as it felt, it hurt and it was hard. It’s a good thing I had Rihanna to help push me through. Who’s That Chick? Just might be my new favourite powersong. I think I’m going to have to make a full on power playlist for my Harry Rosen 8K. Hills can be killers!

I’m actually feeling confident about my hilly Harry run on April 2nd. I was nervous knowing that I’m not going to get too many great runs outside before the race- especially since a spring snowstorm decided to roll in yesterday! Wah! But the good news is, the weather is going to go back up to 10 degrees celcius by the time Harry comes around. Thank you, The Weather Network App!

I went with my Recently Played Playlist which was another big move. I did have ballads come on during this run and I decided to just go with them. Who knew running uphill to David Gray could be a good thing?

Annnd, my prediction of Ashley becoming the next Bachelorette turned out ot be true! It looks like my addiction to this series will happen again in May! Wahoooo! 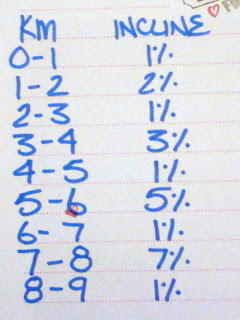