Mmm… not the case. I was walking towards the gym doors and I saw a dime on the floor. I picked it up, looked over at my dad and said with enthusiasm “I found a dime! That must be luckier than a penny!” … I spoke too soon.

I get to the gym and stretch out my legs that were feeling achy from the last two days of working out. All of the treadmills are in use. So, I’m stretching and waiting for the woman who decided to wear a dress shirt with jogging pants to get off her machine. I mean, she is walking while reading a magazine on a treadmill- in a dress shirt. And- she wasn’t the first to leave a machine. Go figure!
I jumped on the available treadmill and was getting ready for my run. And my ear bud cord is tangled yet again. So, I’m taking out the knots while doing a leisurely stroll and thinking to myself “I should really invest in some Lady Gaga Heartbeats in-ear headphones! They are tangle free and have an amazing sound. Well, so I’ve heard…” 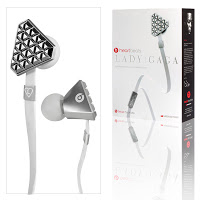 I was so lost in my thoughts and trying to figure out my tangled mess when I knocked my ipod off the shelf in front of me. Get ready for the embarrassing moment –> My turquoise ipod falls onto the turning strip and heads straight for the floor behind me. Then I hear, “Excuse me! Your ipod!” coming from the bicycles beside me. I look over and smile and say with a little laugh “Oh, thanks!” In my head I’m saying “Yes lady, I know… I hit it!” I turn around to get off the treadmill to pick it up and I am still attached to the machine by the “safety string”. Good Jesus. Well, it snaps off of my shirt and I look up to see my dad’s “What are you doing?!” face on and yes, that lady is still watching me. Awesome. This is going to be a great run.

“I love people who make me laugh. I honestly think it’s the thing I like most, to laugh. It cures a multitude of ills. It’s probably the most important thing in a person.”

It’s my favourite thing to do too, Audrey! Just laugh it off friends!