The one question I am getting a lot lately is, “All-star cheerleader? What do you mean by that?”

The defintion: All-star cheerleading gyms aren’t affiliated with a team or school and their main objective is competing.
This past season I was on Power Cheer Toronto (PCT) Cobras International Open All-Girl level 6 team. Our first competition of the season was Nationals where we won the Canadian National Champions title: 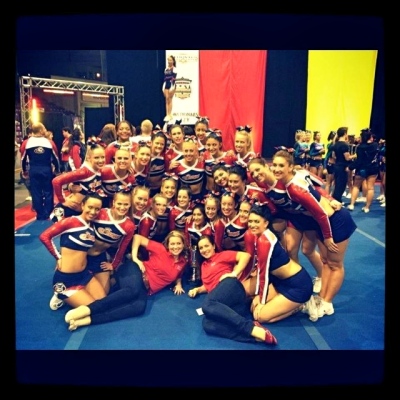 Nationals is held every year in the first weekend in December. The competition lasts a full weekend and has all-star teams, university and college teams, as well as a tumble comp and a stunt comp. The weekend is then finished with a big party with cheerleaders across the country. Cheerleading is a small little world where almost everyone knows each other and it really becomes a big reunion at Nationals.
Three of the PCT Cobras open teams competed at Provincials in March for a bid to The Cheerleading Worlds. This was a 2 day competition. You ran your routine once on the Saturday and then once again on Sunday. The highest scores got offered a bid to Worlds. All 3 teams from PCT got offered either a bid or a partial paid bid: 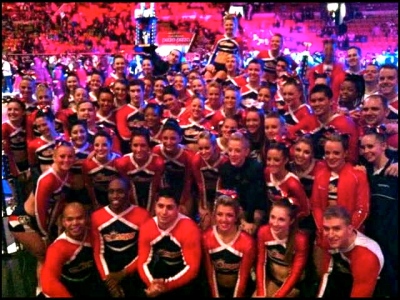 This was my first year competing at Worlds and it was held at the happiest place in the World: Walt Disney World! As soon as we landed from Toronto to Orlando, we made our way to the magical express to the All-Star Music Resort at Disney. Naturally, we got lost in the airport. Luckily, when you travel with 2 other girls who are under 5 feet, it’s easy to tell that you are lost cheerleaders and we were directed where to go (without even asking for help) by a friendly American cheerleader.
After going to our orientation and collecting our credentials which included a 4 day hopper pass to Disney, we headed to our area of the resort, “The Country Inn.” We wore our credentials everywhere to make sure that we didn’t loose them. Especially since we needed our park hopper to enter ESPN’s Wide World of Sports:
I love how this picture makes me look tall. I’m really only 4’9″ so don’t let it fool you! From Thursday to Sunday we were sporting cheerleading clothes all day, everyday. Hair up, bows in, and smiles on our faces.
The competition days were unreal and were filled with elite cheerleaders everywhere. Watching amazing athletes all day? Yes, please! Well, not all day because we also had practices ourselves:
And then it was time to suit up and hit the stage:
Competing on the Worlds stage wasn’t like any other competition I have ever been to.  There were thousands of cheerleaders from all over the world who just wants to see the best of best leave it all on the floor. The energy of the stadium was unbelievable. Everyone would scream when stunts would hit, when amazing tumbling would pass, and clap SO hard during the dance sections. My hands actually hurt and were red after some routines.
In the warm-up area, you had talented athletes all over the mats and TV’s of the team that was hitting the floor. You just have to take it all in and only focus on yourself. And of course, perform the sh*t out of your routine. It’s the last competition of the season so you have to leave it all out on the floor and most importantly, have fun so that you can love every minute of it!

Unfortunately, I can’t say that we walked away with a Worlds title but we had the time of our lives while we were there! And as soon as the competition was over, we were counting down the days until Worlds 2013. You can see more of my trip after Worlds HERE!
When we got back to Canada from our high from Worlds, we had our year end “Red, Gold, and Blue” banquet:
At the awards banquet I received the “Power Spirit” award for our team and we got teary as we watched our year end video. (From 4:30 on, you can see our Worlds recap):
And– my friends on Team Canada All-Girl and Team Canada Co-Ed Level 5 walked away as the four-time World Champs! I’m so proud and incredibly happy for them! You can watch their road to worlds here:
I’m so excited to start PCT’s Season 9 tomorrow and meet my new team: International Open All-Girl 6 Zodiac!

1 thought on “All-Star Cheerleading? Worlds?.. What exactly do you mean?!”