I woke up feeling a little sad about this race. This was the race that I planned for a new PR of 1:45 back in May. Since spraining tendons in both of your feet takes months to heal, I didn’t have enough time to properly train. I ended up selling my bib to one of the lovely Jessica’s friends! She became a marathoner at this race and her recap just might leave you with tears. She’s an inspiration and makes me want to become full crazy instead of the 13.1 half crazy that I am!

I went to the race with the sole purpose to cheer on my running sister Julia who did the half:

Coming off the highway into the busy streets of Toronto, Julia came out with “Oh Sh!t, I forgot my iPod!” And if you have only read one of my blog posts, you’ll know that running without music and solo just doesn’t work for me. I went into strategy mode. She luckily has an iPhone so we just needed headphones. When we got to Yonge and Richmond it was 8:40am, gun time was 9:00am. I love a good challenge so I said, “I’m gonna run down Yonge and go to the Shoppers Drugmart- they’ll have them! We’ve got nothing to loose!!” I jumped out of the car and Jorge  bolted down the Sunday morning empty streets with me. Too bad Shoppers Drugmart was closed. It was Sunday after all. The Amazing Race mode started. We started running to the direction of the starting line with hopes to find some headphones along the way. We asked the medical staff and paramedics, they didn’t have any so we ran up the finishers line (going the wrong way of course) and passed all of the bagels, bananas, and waters waiting for the finishers. I ran in frantically to the convenient store who didn’t sell headphones. We were getting closer to the start. We got to the Hilton hotel where runners were taking up the entire lobby. I went in and asked a concierge if they had any headphones and he directed me to the gift shop that was another dead end. By this point, you would think the gun would have gone off. I wasn’t wasting any time looking at a watch. I was destined to get them to Julia. On the way out, a wonderful pregnant lady stopped me and said, I have spare headphones. I couldn’t have said, “I will pay you anything you want for those!!” She said not to bother and she wouldn’t take my money because she had so many left over at home. As she gave them to me, i couldn’t thank her enough but I knew I had to get to the corrals so off Jorge and I ran. As I looked to my phone to call Julia, I got a message that said, “It’s Queen and Uni, don’t worry about it.” and it was only 8:48am. We were golden. Julia wasn’t answering her phone and I think it’s because she thought it was hopeless. I ended up meeting her at the blue balloons corral. With her headphones in her hand, I got to give her my “GOOD LUCK!!” Face to face and she went to her corral. I couldn’t be happier because she hasn’t run a half marathon without music and race day is not the day to experiment.

Jorge and I stopped to take a quick picture of the half and full marathoners taking off but we accidentally got a video as well:

We then went off to the Sunset Grill for some breakfast with Ken (My Bro-in-Law) and Mumsy:

So yummy! I kind of felt bad for eating a delicious meal while my running friends ran their hearts out. But, we made up for it by cheering on all of these incredible world record breakers at the finish line! It was actually the best race to ever be a spectator at!

And of course my personal highlight, Julia running in her 13.1 half crazy: 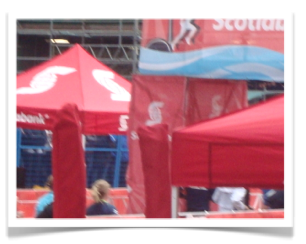 She’s the little blue dot on the far left. The crowd was crazy cheering on their athletes! Jorge thinks this will be her best race photo ever. I’m not so sure…
After hitting the port-a-potties and getting some snacks I ran into my friend Rachel who was cheering on her friend at the marathon! Of course I would run into a friend in a sea of a thousand people! Jorge played paparazzi:

Can we talk about how amazing Rachel’s cheering visor is?! We attempted to take a good finisher picture with Mumsy, Julia, Me, and the Bro-In-Law. This is as good as it got:

And another race recap goes by without a picture of Polk-a-Roo Jorge! Well, he swears he will become the next oldest man to run a marathon and he won’t start training until he is 80. So, I guess he won’t be a feature until then!

As for Jess’ friend, he sent me an e-mail to tell me that my bib brought him luck and he beat his goal of completing the half in sub 2 hours!! Amaaazing! I’m so glad he could run in my place!

Congrats to everyone who ran a race on the weekend!!

Did you run or cheer a race on the weekend?!