For my Dad’s Father’s Day gift we got him tickets to see a TFC game. For those of you who don’t know TFC, it stands for the Toronto Football Club. And not not be confused with American Football- it’s football as in soccer! A good ‘ol game of footy! 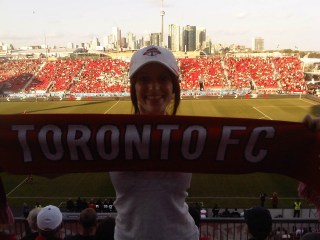 Ever since I was little I would go to all of my dad’s football games and watch him play. I never played soccer but my sister did. And dad still plays twice a week. We had great seats facing the CN Tower and were pumped up for the game against Vancouver. I love that there were 19,000 + people at the game and it was a Wednesday night. The Torontonians go crazy for their TFC! And the supporters section is always on their A game with the cheers.

When Vicki and Antonia were visiting from Ireland last week, it became Vicki’s goal to get a picture holding the CN Tower but we weren’t far enough away to get a good shot. But being at the BMO field was the perfect opportunity:

I love it! TFC ended up beating Vancouver 1-0 with their goal being from a penalty shot that had to be taken over again because a player moved into the box before the ball was kicked. But we scored and the confetti went off and all the supporters went crazy. And so did the lines in the bathroom! Here’s a tip for you: if you go to the bathroom and someone says, “you can use this bathroom but you have to hold the door shut because the lock is broken…” do it and use this trick I came up with:

So perfect! You will never have to wait in a huge line again or be awkward holding a door shut with one leg on the door as you balance yourself over a toilet again!

I can’t wait for my next TFC game! Who else is a TFC supporter?