Skip to primary content
My sister Julia is running 30K Around the Bay today and yesterday she called me on her way to the expo to pick up her bib and I obviously wanted to go. I told her to swing by and get me on her way. And I decided to document our adventure.
Meet my sister Julia:

How crazy is it that she is running 30K?! I mean seriously– 21K is enough for me!

So I started getting hungry before we even got there. (Typical). But lucky for me there was a farmer’s market right beside the expo! How perfect! I was going to get an apple but then I passed by the British booth and saw Empire Cookies and I was sold on them. 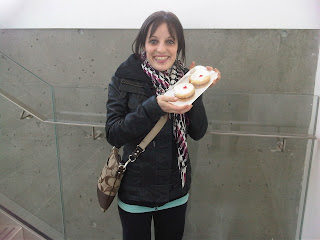 So, we became those unhealthy girls who walked into the expo with cookie crumbs ALL down our jackets as we shoved the rest of the cookies in our faces.
As we walked around I found my favourite store at the Disney Expo One More Mile. I love all of their hilarious products. Julia found this funny:

And then I found the sentence that I was saying after I ran the Disney half and said I would never run another one again. And then I signed up for the Goodlife Toronto half. 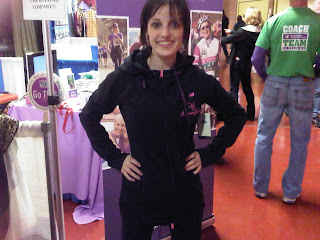 And- it did. I immediately said, “SIGN ME UP!!” And Julia followed. Muahahahhaha! 30K in August– hellls yes! I’m SO excited! It brings my two worlds together theatre and running. AHHH-MAAAAY-ZIIIING!
We continued to walk the booths and came across the finish line. I made Julia take a picture in front of it.

How amazing is it that it ends in a stadium and she will be on a big screen running through the finish line?! Mainly more exciting for me and my bro in law Ken because we won’t have to freeze our butts off waiting outside for her to finish. I’ve never been a spectator at a running event before but I’m SO excited to cheer my sister on today! Wahooooo!

After the expo I was so pumped for my 14K run that I had on tap for the day. I suited up and ran High Park which is where my Harry run will be next week. I put some U2 on my ipod and hit jukebox shuffle and off I went. I ended up going through the park and detoured into the High Park Zoo. It’s so small that it only lasts about 1K. But I saw some animals along my way and took a photo for you:

After running High Park I’m so confident for next weeks race. My only concern is picking what my happy pace will be. I only know how to pace for long runs and I’m a wee bit concerned for how hard I should go next week. But, I’ll figure it out.